Industry 4.0: the new industrial revolution is under way

Industry 4.0: the new industrial revolution is under way

Data, digitalisation and connectivity of means of production have led to considerable advances in industry in recent years. On top of productivity gains and shifts in production modes, this trend is disruptive in the way in which it will completely alter some sectors of activity. What will its main features be?

This new chapter in industrial history began early this decade with the exploitation of all the data generated by each machine or production tool. Called “Industry 4.0”, it is being driven by the pooling of massive amounts of data. This new industrial age has been made possible by a number of facilitators. First of all, connectivity through sensors, then the cloud, and then, ultimately, tools for analysis. In the digital era, a connected factory – something that will be routine in the future – will spew out as many as several terabits1 of data every day. Aggregating these data and allowing them to interact is helping make production lines more precise and enhancing their capacities. This can be seen in the auto sector, for example. One of the world’s most automated auto plants is the Jeep Wrangler plant in the US, with 260 robots. This plant is special in that one assembly line, which normally makes just one model, can now make eight different versions of that model.

A new digitalisation-driven industrial revolution is under way. The disruption that characterises it is based on the main innovations of recent years. Five major channels of disruption can be found in industry. These are robotics, smart factories, 3D and 4D printing, autonomous vehicles and drones. These avenues of development have caused the major upheavals that will continue to be felt in industry in the coming years. Clearly, the best-known and most widespread of these is robotics, which has already revolutionised modes of production. But the others have caused far greater disruption. 3D and 4D printing, for example, have led to major advances in prototyping. This technology now makes it possible to design a given part digitally, to test it and to manufacture it within a very short period of time. It saves manufacturers lots of money, gets their products to market quicker and, most important, enhances makes utmost use of creativity and personalisation. With its widespread media attention, drones also offer industries a range of possibilities that are still hard to gauge. Logistics and distribution are the main sectors concerned, but drones are now also used in agriculture and architecture. Autonomous vehicles are just as disruptive, affecting society’s very underpinnings by altering the traditional approach to public transport. 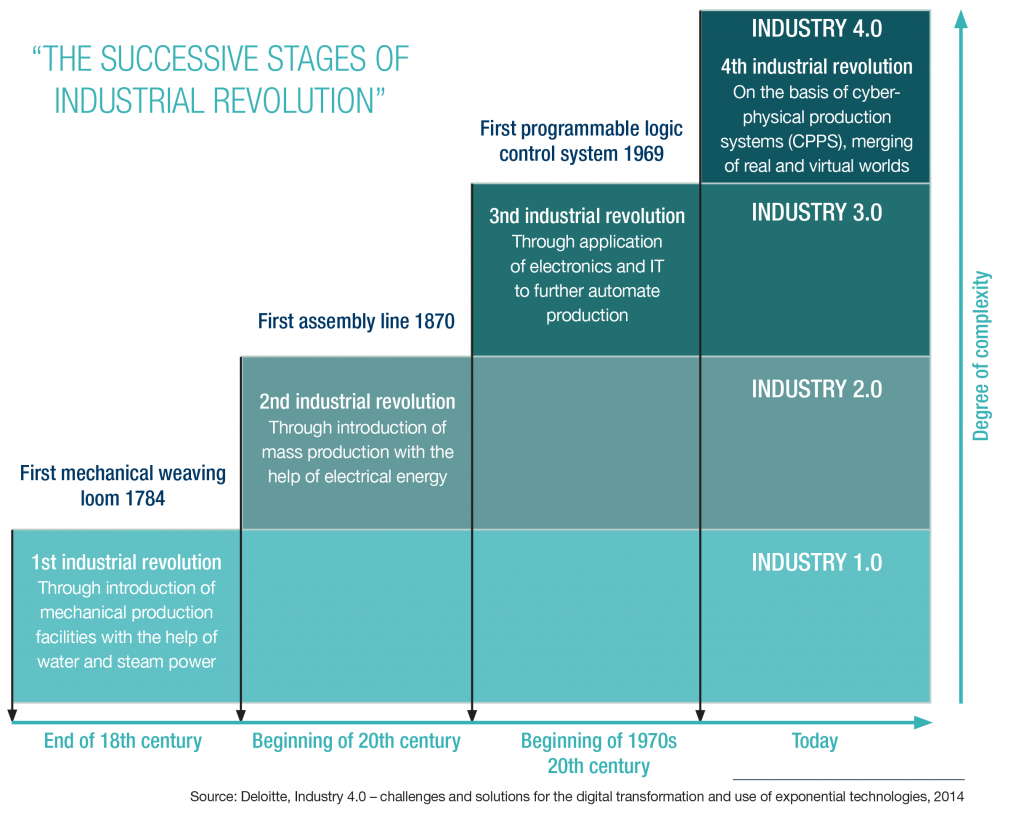 While a car is used on average just 3% of the time, an autonomous vehicle will soon be able to do without a driver. It will be able to drive the kids to school, go fetch groceries ordered online, or go pick someone up at the airport. Autonomous cars will also inevitably bring improvements in human progress by enhancing security and reducing pollution.

But the most tangible and characteristic illustration of the current industrial shift is clearly the smart factory, which not only helps alter modes of production, it also makes intense changes in the very business activities of some groups. For companies like General Electric, Siemens and ABB, with their heavy installed industrial bases, production equipment is no longer part of their core offering. These companies, which have developed their own digital platforms, are now in the business of services and related personalised applications. Ultimately, the idea is to be able to control a worldwide fleet of factories from a given point, and to compare and optimise their processes. Even more than data and digitalisation, connectivity has driven these group’s roll-out of enhanced services in the form of predictive maintenance by anticipating breakdowns rather than managing them after they occur. A company like Microsoft, for example, has recently developed an interface for monitoring all high-voltage power lines in the US that can locate any breakdown and determine its cause. For clients, this limits down time in production, which saves time and enhances productivity. This offering of services is already drawing growing interest from clients. General Electric, which generated $50 million in revenues last year from its Predix platform, is targeting $4 billion by 2020.

“Cost savings are estimated at $531 billion annually for S&P 500 companies.”

On top of the benefits for industry 4.0 actors, the financial implications are phenomenal. According to a recent study3, cost savings produced by this new industrial era – in terms of capital expenditure and operating expenditure – are estimated at $531 billion annually for S&P 500 companies (excluding financials). And there are also human advantages. Whereas machines – and, more recently, artificial intelligence – are often set off against humans, the current disruption is changing this perception. In fact, current changes suggest that cooperation between robots and humans – “cobots” – will lead to a re-industrialisation of developed economies, as ongoing technological progress provides a credible alternative to low-cost manufacturing in emerging economies, especially as labour costs are now rising in those economies. In addition, the advent of cobots should make work easier and help mitigate the coming structural labour shortage. So the most likely scenario is that the current revolution will ultimately lead to a redistribution of tasks between machine and humans, with machines’ handling manufacturing and humans handling services, hence a shift in human workers towards tertiary activities.