Industrial robots: the start of a megatrend

Industrial robots: the start of a megatrend

First introduced in the 1960s, industrial automation through robotics — also known as robotisation — is seeing a new phase of expansion linked to the pursuit of productivity gains, improvements in the quality of finished products and the need to offset wage increases.

Currently, it is estimated that 10% of manufacturing tasks are performed by robots, a figure that could rise to 25% by 2025.

Two major factors are behind this growth and lead to the conclusion that robotisation will continue to expand in the years to come.

First, technological advances have resulted in greater productivity gains. According to the Boston Consulting Group (BCG), the performance of industrial robots has improved by 5% per year over recent decades, a trend that should continue into the future.

Second, the decrease in the price of components, such as sensors, screens and processors, reflected in lower prices for industrial robots (-27% over the past 10 years for a welding robot, -22% over the next 10 years according to the BCG), has led to a shorter payback period for the client.

Thus, investing in industrial robots is increasingly being weighed against hiring staff, and this holds true in both the developed and emerging markets. According to the BCG, the turning point comes when a robot costs 15% less than an employee.

The market is currently dominated by four groups having a global presence: ABB, Kuka, Fanuc and Yaskawa. Altogether, they account for around 50% of the market. 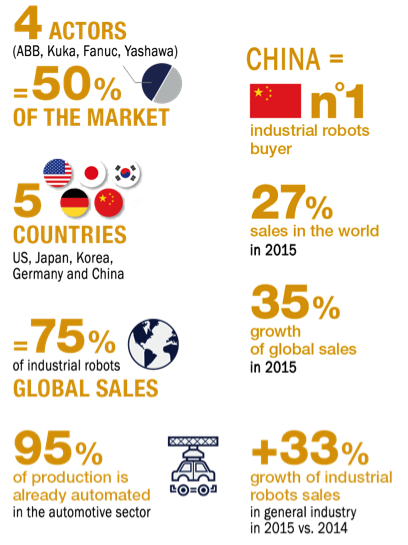 WHAT ARE THE REGIONAL, SECTORAL AND TECHNOLOGICAL TENDENCIES OF THIS MARKET?

FROM A REGIONAL PERSPECTIVE: more than 75% of the sales of industrial robots are made in five countries, i.e. the US, Japan, South Korea, Germany and China.

With the exception of China, historically, these countries have had highly developed automotive and electronics sectors and should continue to be among the world’s major users of industrial robots in the future. Japan in particular has set the target of robotising 25% of its large corporations and 10% of its SMEs within the next
five years.

China became the first purchaser of industrial robots in 2013, accounting for 27% of global sales in 2015. This increase helps meet two of China’s objectives, namely to offset a structural increase in local wages and address a shortage of labour linked to demographic trends. The Chinese government has made robotisation a pillar of its strategy to move the country’s industries toward higher-quality production. For example, 80% of factories in Guangdong Province are slated to be automated by 2020. In 2015, 35% of the growth in global industrial robot sales could be attributed to demand from China; in 2018, the country should have the largest installed base in the world. And this growth should continue well beyond 2018 due to the currently low penetration of robots in Chinese industry (only 49 robots per 10,000 employees in 2015, compared to a global average of 69 and as much as 541 in South Korea). 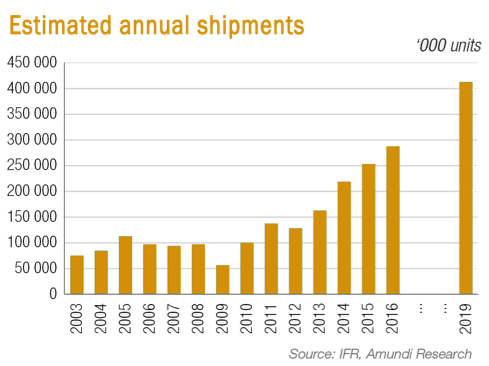 IN TERMS OF SECTORS: the application of industrial robotics is increasingly varied. Whereas 40% of industrial robots in use today can be found in the automotive sector, where production is already 95% automated, this share is expected to decrease in favour of other industries, which still have low penetration rates.

In 2015, general industry has driven the growth of industrial robots sales (+33% vs. 2014) while automotive only grew modestly. Sales in electronics (+41%), metal (+39%) and chemical, plastics and rubber (+16%) accelerated particularly. These segments as well as logistics, aerospace and food & beverage should grow strongly in coming years.

FROM A TECHNOLOGICAL STANDPOINT: developments in collaborative robotics — robots that are smaller, lighter and equipped with sensors — are facilitating the integration of robots in production chains alongside human workers.

In addition to expanding the scope for the technology’s application, these “cobots” also increase its customer base, as SMEs are also able to access the technology at a reasonable cost. For example, Universal Robots has reported that the payback period on its robots is 195 days of use.

And while the cobots were originally developed by newcomers such as Universal Robots and ReThink, global leaders ABB, Kuka, Fanuc and Yaskawa have all launched their own models over the past two years and should soon dominate the market thanks to the international reach of their distribution networks.

WHAT ARE THE CHALLENGES FACING THE CURRENT LEADERS OF INDUSTRIAL ROBOTICS?

In view of the strategic priority assigned to industrial robots by the Chinese government, which aims to have three to five national corporations that are competitive on the international level within the next five years, it is worth examining the challenge posed by China to global companies in this domain.

Currently, there are several hundred producers of industrial robots in China. While the vast majority of these are in low-end production, their domestic market share continues to grow. In 2015, 30% of the robots sold in China were sold by local companies. The government’s goal is to increase this figure to 45% by 2020. In the short term, however, we believe that competition from China represents only a limited threat for international corporations. In our view, the expansion of Chinese companies into higher-end production faces two hurdles, both domestically and internationally. First, in order to increase precision and reliability, Chinese producers will be forced to turn to suppliers that dominate the production of critical components such as gearboxes (Nabtesco / Harmonic Drive Systems), which account for a third of the production cost of an industrial robot. This will significantly weaken the price advantage of Chinese manufacturers. Second, much of the added value in robotics comes down to software (ease of programming, intuitive control…), a field in which Chinese manufacturers still lack expertise. Finally, a local presence will be needed to provide after-sales service. Major investments will therefore have to be made to develop an international network of qualified engineers paid in local wages.

To quickly close the technology gap, Midea, the second largest Chinese home appliances manufacturer, decided last year to acquire Kuka, for a value of $5 billion. Its objective is to become the n°1 supplier of industrial robots in China (position currently held by ABB) and, longer term, to develop service robots. As a consequence, the group is looking to increase the government recognition as a local brand (domestic suppliers being favored) and is working on developing less expensive robots for human-robot collaboration and applications outside the automotive segment.

With the increasing penetration of robots in general industry, new players, benefitting from lower barriers to entry in this segment (more fragmented customer base, easier integration, lower need for aftermarket…), are launching mid-market products, leading to a higher price pressure in the industry than we initially expected.

Consequently, global leaders, traditionally positioned on the premium segment only, are adapting their offering to address this new competition. For instance, Kuka invested in 2016 in KBee which sells its cobot Franka from $10k. Another competitive challenge could be posed by technology companies, which are showing an increasing interest in the robotics market. For example, Google has invested in some 10 robotics companies in recent years, less out of a clearly defined strategy and more out of the conviction that robotics will be a key technology for the future. Acquisitions by the American giant include Industriel Perception, which produces a robot used in logistics and industry. In 2012, Amazon acquired Kiva Systems, manufacturer of a mobile robot solution that optimises logistics in warehouses. The solution, which had previously been marketed for sale, is now exclusively used internally and Amazon’s future intentions remain uncertain.

Finally, the robotics market is likely to attract the attention of software companies like SAP and Microsoft given that software, like in industrial automation in general, is becoming more and more important and robot manufacturers currently utilise their own closed system.

The current leaders of the robotics industry seem well positioned and a step ahead of their competitors when it comes to harnessing the strong growth in industrial robots, a market driven by structural trends that are destined to continue into the future.

Like Huawai partnering with Kuka in developing smart manufacturing solutions, in the future, the ambition of Chinese companies and technology firms to direct their development toward industrial robots will lead to more partnerships with leading industrial players.