Hydrogen, a sound choice for the energy transition

Hydrogen, a sound choice for the energy transition

Hydrogen (H2) is the most abundant chemical element in the universe. It is a light, highly reactive gas that combines with many other elements. Like other gases, it can be stored relatively easily for long periods and put to many different uses. For all of these advantages, hydrogen stands as a sound future choice for the energy transition as it enables the development of decentralised renewable energies and a sharp increase in green mobility solutions. Under certain conditions. Read on to find out more.

Hydrogen is often presented as the energy of the future. And its promise is easy to understand. It is an abundant resource, produces three times more energy for the same mass than petrol, and, when used in a fuel-cell vehicle, rejects zero carbon dioxide into the atmosphere, only a little water vapour.

But for now, 95% of hydrogen is produced using fossil fuels (see insert hereafter). A less polluting alternative exists in the form of low-carbon hydrogen obtained through water electrolysis. This is a more environmental solution.

Room for progress in the production method

The advantage of electrolysis

But another, far less polluting way to produce hydrogen exists: electrolysis. Known since the 19th century, this process consists in separating hydrogen from oxygen in water. The raw material of electrolysis is water rather than hydrocarbons. The technology has a reduced environmental impact and lower CO2 emissions,

While more respectful of the environment, electrolysis remains an expensive solution, costing four or five times more than vapour reforming. But the International Energy Agency (IEA) is optimistic. In a recent report, the IEA estimated that “the cost of producing hydrogen from renewable electricity could fall 30% by 2030 as a result of declining costs of renewables and the scaling up of hydrogen production”.

The energy of mobility

Vehicles running on hydrogen with a fuel-cell emit no particulate matter or CO2, only a small amount of water vapour. They also have a high range (500 km to 700 km) and can be charged quickly (in under five minutes, compared with eight hours on average for electric cars).

In a study commissioned by the Hydrogen Council, the McKinsey consultancy firm estimated that hydrogen could fuel 10 million to 15 million cars worldwide by 2030. 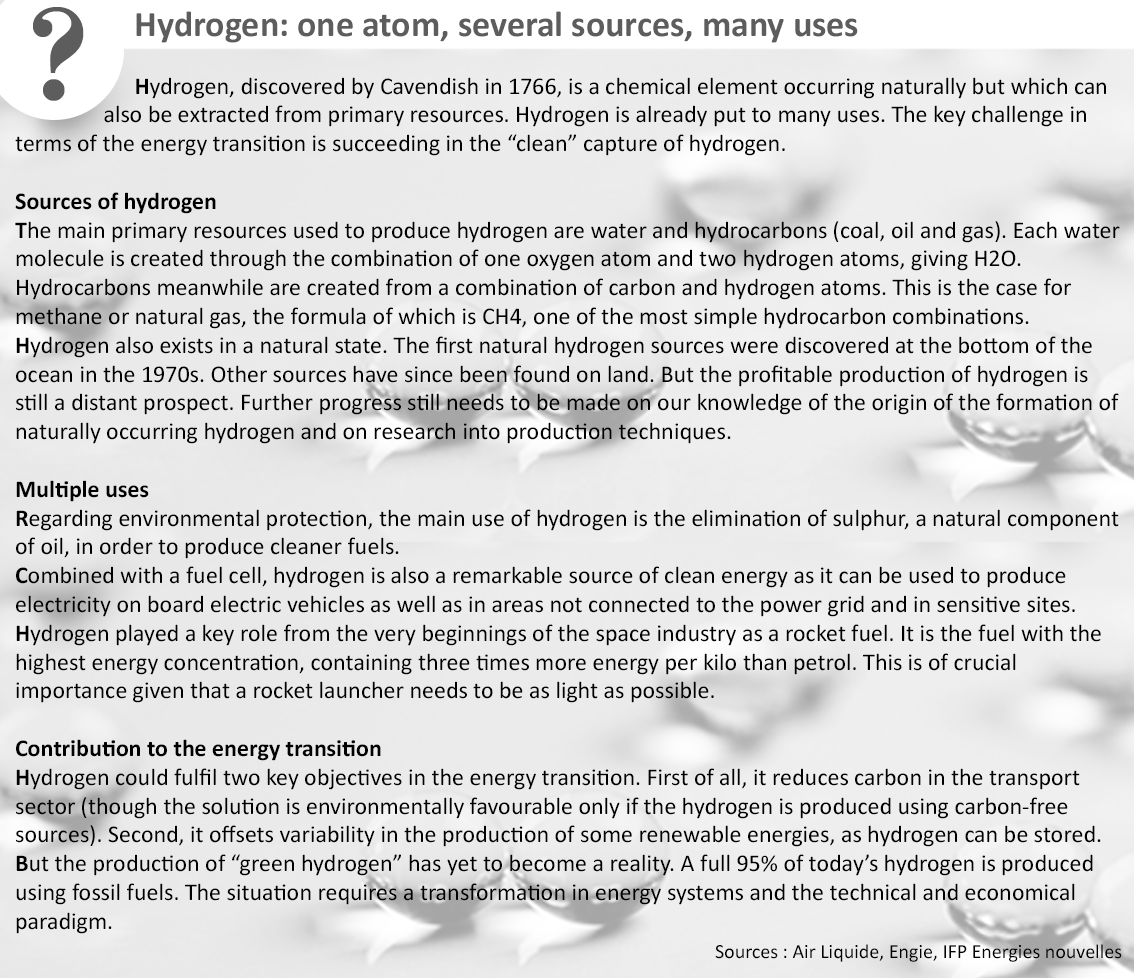 Source : Slate.fr (if not mentioned otherwise)