Access to sanitation: a major human and cultural challenge

Access to sanitation: a major human and cultural challenge

Around 4.5 billion people do not have access to safe sanitation. This reality, which is too often overlooked, has a dramatic impact on people around the world. For its part, the ravages of Covid-19 have highlighted the vital role played by sanitation in the fight against the pandemic. As never before, the topic needs to be considered a priority.

Sanitation, the key challenge of the decade

Some 844 million people around the world still do not have basic access to water. Whilst this is still a large figure, it has fallen significantly in recent decades: from 24% of the world’s population in 1990 to 11% today1. Meanwhile, 2.4 billion people still lack basic sanitation services, such as toilets or latrines, while 60% of the world’s population lack access to safely managed sanitation facilities (i.e. that include treatment)2. One in nine people practices open-air defecation.

“The issue of sanitation has often been neglected, because the priority is usually given to access to drinking water,” explains Caroline Figuères, Strategic Water Adviser to the Dutch government (Benin Embassy) and the former head of the municipal infrastructure / urban water and sanitation department at the IHE Delft Institute for Water Education, which operates under the auspices of UNESCO. “Yet the lack of access to sanitation and basic hygiene by a large part of the world’s population has serious consequences, given all the risks associated with discharging untreated wastewater into the natural environment.” There is no shortage of figures to show that sanitation is a major public health challenge. Every day, more than 80% of wastewater from human activity is discharged into rivers or the sea without being treated. Every day, 814 children aged under five around the world die because of a lack of sanitation. Every year, two million people die as a result of unsafe water and a lack of hygiene, while dysentery (acute diarrhoea) and cholera claim nearly 800,000 lives3.

A new major problem has now been added, the importance of water during a health crisis – such as the coronavirus pandemic. Water services are a key link in the fight against Covid-19, with handwashing being one of the primary measures to prevent the spread of the virus. Yet 3 billion people do not have access to handwashing with soap in their homes4. Is it realistic to try and lock down the 2 billion people in the world who do not have safe water at home?5

By 2050, as a result of global warming, more than half the people on the planet will face water shortages at least once a year, which will create a genuine threat to the quality of water resources, along with the associated biodiversity6.

For all these reasons, the subject is naturally among the priorities set by the United Nations.
“Ensure access to water and sanitation for all” is the 6th of 17 Sustainable Development Goals (SDGs) adopted in 2015 by 193 countries7. Achieving this objective means meeting three types of challenge.

The first is a cultural one. “There is a real taboo around sanitation,” underlines Céline Robert, head of the Water and Sanitation Division at the French Development Agency (AFD). “One reason for the lack of progress is that it’s not a subject that people want to look at. It involves something very intimate, which shouldn’t be visible.” As Caroline Figuères confirms: “There is a huge amount of cultural reticence.” Around the world, politicians find it difficult to talk about “‘peeing and pooing’ or menstruation, which is often seen as a subject for women. It’s all so culturally complicated that people simply don’t talk about it! And yet, in many countries, if we want girls to have the same opportunities as boys at school, we have to talk about it!”

The second challenge is financial. As Céline Robert explains: “Massive investments are needed to deal in a practical way with the two main problems: on the one hand, access to services, and on the other, the management and protection of water resources.” Collection, transport, treatment, removal, use of waste… In an urban environment, major construction work is essential for providing sanitation facilities and giving households access to services. 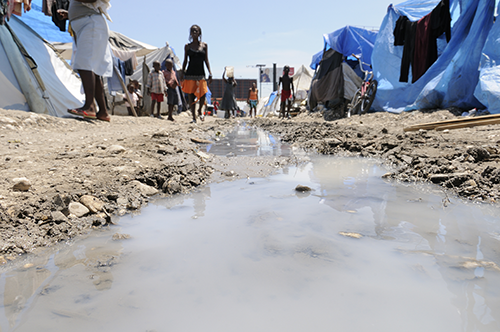 Meanwhile, sanitation is also a challenge in terms of human resources, given the need to train specialists in all the countries concerned, and represents a particular focus for the work of the AFD.

The impetus of a new dynamic

The French Development Agency is among the institutions that are heavily involved with this issue, with 9% of its activities in 2019 being dedicated to ‘Water and Sanitation.’ Its division of the same name is currently delivering 220 projects, representing an investment of €6.5 billion: 50% of them in Africa, 30% in Asia and the Middle East, and 10% in Latin America. The priorities, as Céline Robert explains, are “to improve people’s access to water and sanitation services, to maintain water resources (producing and distributing drinking water, building sewage plants, etc.), and to help the local authorities define their policies and manage their services effectively.”

Another remarkable example of the support being provided for sanitation is the work carried out since 2001 by the World Toilet Organisation8. With the “World Toilet College”9, the NGO trains students in the design and maintenance of toilets, sanitation in schools and the delivery of sustainable sanitation systems.

Private individuals have also followed the lead of such institutions, notably the Bill and Melinda Gates Foundation. Probably the most generous philanthropist in history, Bill Gates has made sanitation and the treatment of excrement a major focus. He has even set himself an objective: to reinvent the toilet. In 2011, his foundation launched the ‘Reinvent the toilet challenge’, designed to spark innovation in the area of toilets and sanitation. The idea is to enable Africa to move directly to the toilets of the future, in the form of economical dry latrines that treat organic waste directly. Hundreds of millions of dollars have been invested in research and development, leading to the design of a futuristic prototype by a Zurich-based company, Helbling. Determined to attract attention to the subject, Bill Gates welcomed the opportunity to address the ‘Reinvented Toilet Expo’ held in Beijing in 2018 – standing on the podium next to a jar of faecal matter.

In addition to the practical results achieved, the American billionaire’s involvement led to a visible focus on the entire sector. “The Covid-19 pandemic has made public health and education once again the centre of everyone’s attention, and has shown that what was considered impossible a few months ago is a reality today,” says Caroline Figuères. “We now need to act, so that recent events lead to a change in people’s attitudes. Through change, we can meet the challenges and take the action needed to ensure that everyone has access to water and sanitation services, and that these are managed in a sustainable way.”