Rising inequality: a real threat for the economy

Rising inequality: a real threat for the economy

It is now well known that income inequality has increased in developed countries since the 1980s. The rise has been particularly spectacular in the United States and in Japan but also in countries considered as being very egalitarian such as Sweden.

According to this theory, proposed by the economist Simon Kuznets in the 1950s, income inequality would be expected to rise in the first phase of economic development of a country (that is to say when a country switches from low-income to middle-income) before falling in a second phase (i.e. when a country moves to high-income).

This theory has clearly been invalidated in the last decades in the developed countries and this is why the economist Branko Milanovic2, undoubtedly the best expert on the topic of inequalities, developed the concept of «Kuznets waves»: the evolution of economic inequalities would not be solely a function of the level of economic development, but would depend on a combination of politico-economic factors and would evolve as waves. Branko Milanovic links the rise in income inequality in developed countries over the last decades to a set of factors that do not exclude each other:

In particular, Branko Milanovic insists that it is difficult to measure the respective effects on inequalities of technological change and globalization, as these phenomena are intertwined.

THE LAST DECADES HAVE BEEN MARKED BY THE DISAPPEARANCE OF MIDDLE SKILL JOBS IN DEVELOPED COUNTRIES.

For the United States, the labor market specialist David Autor3 (MIT) showed that in 1980, 42% of people with no university degree occupied low-skill jobs, 43% middle-skill jobs and 15% high-skill jobs, whereas these proportions were respectively 54%, 29% and 17% in 2017.

This is largely due to the disappearance of routine production jobs. This has exacerbated income inequality by level of education: higher-educated individuals were able to migrate to well-paid jobs while lower-educated individuals went to low-paid jobs. The disappearance of middle-skill jobs and the mobility of less educated individuals to lower-skilled jobs had a significant socio-geographic impact. David Autor has shown that in the United States, high-wage workers have concentrated in large cities in recent decades and that the link between the proportion of individuals with a university degree and the size of cities has increased considerably. A recent IMF working paper4 shows that «regional inequalities in OECD countries are significant and have increased over time,» particularly because of the decline in mobility of low-income households. This geographical fragmentation between the big cities and the rest of the country is particularly strong in France and the United Kingdom, and fuels the feeling that some regions are abandoned.

A paper published in the Quarterly Journal of Economics in 20185 focusing on the United States showed that two thirds of the rise in the dispersion of earnings over the period 1978-2013 occurred between companies and one third within companies. However, researchers show that the realities in the labor market differ greatly according to the size of firms: they conclude that for large firms (more than 10,000 employees), 42% of the increase in earnings’ dispersion between 1978 and 2013 took place within companies, as median earnings fell6 while the earnings of the top 10% employees rose sharply. On the other hand, the real compensation of the highest paid 1% increased by 137% in large companies but only by 45% in small companies. In other words, pay inequalities in the US have risen much more in large firms than in small firms since 1978. 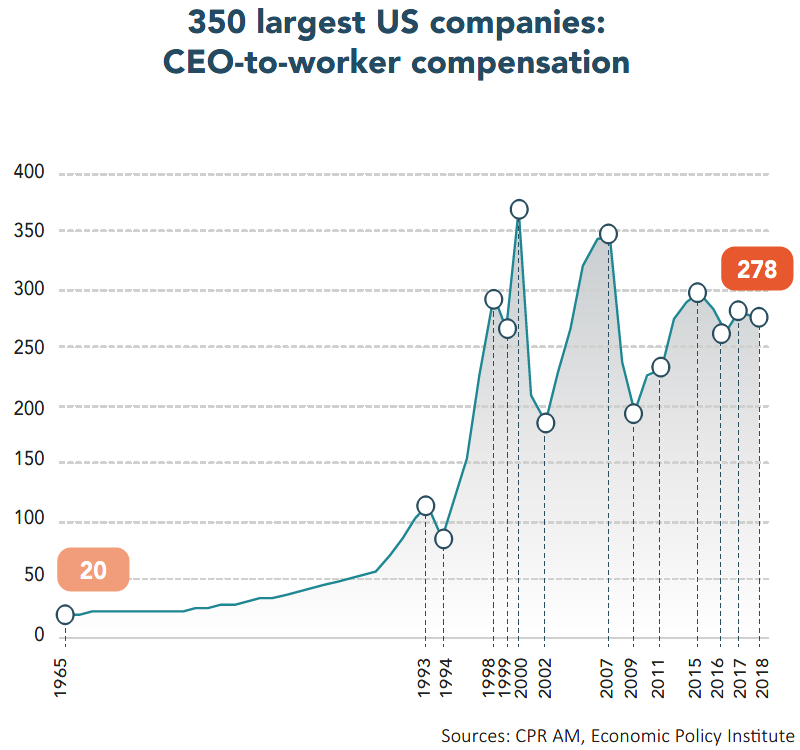 NB: the non-partisan think tank Economic Policy Institute (EPI) recovers the salaries of the 350 largest American companies
for each year. For each of these companies, EPI divides the CEO’s remuneration by the average salary of employees
with no managerial responsibility in the company’s sector, then calculates the average for the 350 companies.

RISING INEQUALITIES POSE A THREAT FOR THE ECONOMY AND FOR LONG-TERM GROWTH.

A body of the economic literature indicates that income inequalities cause a drag on economic growth. Focusing on rich countries, an OECD working paper published in 20147 concluded that «income inequality has a sizeable and statistically significant negative impact on growth”. This study indicates that the main mechanism “through which inequality negatively affects economic performance is by undermining educational opportunities for children from the poorer segments of the population, reducing social mobility and hindering skills development”. It states that a 1-point drop in the Gini index (an income inequality indicator equal to 0 when all individuals receive the same income and 100 when an individual receives the entire income of a country) translates into a cumulative increase in GDP of 0.8 point over the next five years (i.e. 0.15 point of growth per year). An IMF working paper of 20178 entitled Inequality Overhang has shown that the effects of income inequalities on growth are non-linear: an increase in inequality has an even more negative impact on GDP growth when inequalities are already high.

Incidentally, this negative impact of inequality on potential growth complicates even more the mission of central banks.

Several central banks in developed countries (BCE9,10, Bank of Canada11, Reserve Bank of Australia12) have recently indicated that rising income inequality is one of the causes of the decline in neutral rates (i.e. equilibrium real interest rates). Indeed, a number of central banks have experienced and / or are still experiencing difficulties in normalizing their monetary policies. On this point, the snake is biting its own tail because the ultra-accommodative policies of central banks have been accused by some of fostering the growth of wealth inequalities, notably by pushing up the value of financial assets.

MORE AND MORE ACADEMIC RESEARCH HAS COME TO THE CONCLUSION THAT ECONOMIC INEQUALITY IS ONE OF THE PHENOMENA BEHIND POPULIST MOVEMENTS IN DEVELOPED COUNTRIES.

The subject is tricky because there is no uniformly accepted definition of populism. The political economist Francis Fukuyama, for example, describes populists as “politicians who claim to have a direct charismatic connection with the people, which would give them special legitimacy in pursuing the people’s interest.”

For Fukuyama, «this poses a challenge for democracy because these types of leaders tend to stand up against the institutions: they oppose the courts, the media, the technocrats and the institutions of control that are on their way”. According to him, populist leaders promote popular economic policies in the short term but disastrous in the long term13. While populism first referred to the governments of Latin America in the 1980s, then to some post-communist countries of the 1990s and 2000s, the new development of recent years has been the emergence of a new wave of populism in Western countries where democracy is firmly established.

The rise in economic inequality could have been expected to favor left-wing parties but, as the economist Thomas Piketty14 shows by focusing on the United States, France and the United Kingdom over the period 1948- 2017, the leftist parties lost over time the support of the least educated voters, who have been the main losers of major economic developments in recent decades, and have gradually become elite parties. Piketty and Fukuyama, for example, point out the fact that the Democratic Party in the US has lost contact with the white working class, which had been the core of their electoral base in the 20th century. Overall, the rise in inequality has therefore pushed the populist parties/movements/ ideas. Focusing on European countries between 2000 and 2017, economists have shown that a 1 percentage point increase in the unemployment rate implies a 1 percentage point increase in the voting share in favor of populist parties15.

The consequences for markets when populist governments come to power can be extreme. This was particularly noticeable during the formation of a League / 5-star coalition government in Italy in the spring of 2018 (the 10-year spread between Italy and Germany went straight up well above 200 basis points) or during social unrest movements in Chile in October / November 2019 (very strong depreciation of the Chilean currency and sharp fall in equity markets).

In conclusion, the sharp rise in economic inequality in developed countries represents a real long-term threat for the economy. It begins to affect economic growth negatively, exacerbates inequalities between regions and comes, along with other factors, to fuel populist movements. It is urgent to tackle the problem.

Notes —
1. Incidentally, it is interesting to note that income inequality at a global level (that is, when we compare the income of all people on the planet) has decreased in recent years with rising income in China, India and a number of emerging countries.
2. “Global inequality: a new approach for the age of globalization”,
Branko Milanovic, 2016, Harvard University Press.
3. Autor D., 2019, “Work of the past, work of the future”
4. IMF working paper, 2019, “The Great Divide: Regional Inequality and Fiscal Policy”.
5. Song G., D. Price, F. Guvenen, N. Bloom & T. von Wachter, 2018, “Firming up inequality”, Quarterly Journal of Economics.
6. In companies with 100 to 1000 employees, median real earnings rose by 31% while they fell by 7% for companies with more than 10,000 employees.
7. “Trends in income inequality and its impact on economic growth”, 2014, OECD Social, Employment and Migration working papers.
8. “Inequality overhang”, 2017, IMF working paper.
9. “The natural rate of interest: estimates, drivers, and challenges to monetary policy”, 2018, ECB Occasional Paper.
10. “Determinants of the real interest rate”, 2019, Philip Lane.
11. “An update on the neutral rate of interest”, 2017, Bank of Canada.
12. “The neutral interest rate”, 2017, Reserve Bank of Australia.
13. Fukuyama F., 2019, “The new identity politics: Rightwing populism and the demand for dignity”.
14. Piketty T., 2018, “Brahmin Left vs Merchant Right: Rising Inequality & the Changing Structure of Political Confl ict”, WID. world working paper.
15. Algan Y., S. Guriev, E. Papaioannou et E. Passari, 2017, “The European Trust Crisis and the rise of Populism”, Brookings Papers on Economic Activity.