Although they represent only a small market of 210,000 metric tons a year, rare earth elements – consisting of 17 elements in the periodic table – are used for their specific and even unique characteristics in numerous industry sectors, some of them sensitive and generating high levels of added value, such as defence, space, and information and communication technology. Some of them are currently irreplaceable, hence their status as strategic and even critical substances, depending on the known level of supply risk.

Rare earth elements are not as rare as all that!

Lutetium – one of the least frequently occurring rare earth elements – is ten times more abundant in the earth’s crust than silver, while cerium is more abundant than copper. However, three quarters of reserves are concentrated in Asia, particularly in China (37%), and rare earth elements are most often extracted as by-products of base metals in very small quantities, and are thus hard to separate out. 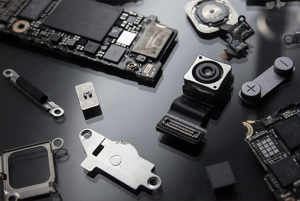 Driven by the transition to renewable energy and digital technology, global demand for rare earth elements is likely to remain buoyant over the next few years. Forecast demand just for the rare earth elements required for the 24 million electric vehicles forecast to be built in 2030 exceeds current global production! As for growth in offshore wind farms, the need for permanent magnets – which require particularly large amounts of rare earth elements – on its own equates to 10% of current production.

A complex environment at the intersection of industrial, environmental and geopolitical issues

Extracting and processing rare earth elements is a long, complex process that varies depending on the type of deposit. Although rare earth elements are used for generating clean, CO2-free energy, usually as part of ecological transition efforts, the environmental impact of processing them is significant due to repeated use of acids at various stages of the process, generation of significant volumes of waste and consumption of fossil fuels, such as coal in China.

Since the end of the 1990s, China has become the world’s leading producer of rare earth elements at the expense of Western nations, which over the years have seen both their production capacity and their industrial and technological expertise dwindle. China’s overwhelming dominance is reflected in the existence of six state-owned groups including China Northern Rare Earth, the global leader and operator of the world’s large rare earth mine in Bayan Obo.

On the strength of its monopoly across the whole sector, including the manufacture of high value-added products, China is threatening to “turn off the tap” on its exports, both to protect its own resources and in retaliation for the US/China trade war.

Can the supply of rare earth elements be met without China?

Anxious to reduce their dependency on China, Western countries are taking action to wrest back control of a crucial aspect of their national sovereignty. Fifteen or so advanced mining projects are underway outside China, notably in Australia, suggesting that a supply-side response not involving China is possible.

However, efforts to expand these capital-intensive projects could, in the short term, be hampered by a variety of factors, e.g. country-specific risk, lack of social acceptance, insufficiently high-quality deposits, lack of full integration into the value chain, current low prices of rare earth elements, and ten-to-fifteen-year project timescales combined with the risk of substitute products being developed.

The challenge of a responsible Europe

To date, fewer than 1% of rare earth elements – including those used in many everyday items (e.g. neodymium in magnets, yttrium in LEDs and dysprosium in speakers) – are recycled. To conserve primary resources and reduce supply costs, development of the recycling of rare earth elements is thus something to be encouraged, though it currently remains very limited due to the small quantities used, their dilution in many devices with very short lifespans, higher recycling costs than for primary extraction products, and the risk of technological breakthroughs obviating the need for such resources in the long term.

Apart from two large European mining projects currently under consideration (Norra Kärr in Sweden and Kvanefjeld in Greenland), we think it is in the field of recycling – one example being ongoing discussions about the creation of recycling capability for permanent magnets – and the development of “responsible” mines that Europe has a key role to play.

By offering increasingly demanding and responsible consumers a more environmentally friendly supply, Western countries should, in the medium term, be able to compete with the Chinese model.

“Driven by the transition to renewable energy and digital technology, global demand for rare earth elements is likely to remain buoyant over the next few years. Forecast demand just for the rare earth elements required for the 24 million electric vehicles forecast to be built in 2030 exceeds current global production! As for growth in offshore wind farms, the need for permanent magnets – which require particularly large amounts of rare earth elements – on its own equates to 10% of current production.”