Plastic pollution is a global challenge

Plastic pollution is a global challenge

“Each human being on average ingests five grams of plastic a week.” This finding from a recent US study has made headlines around the world. We already knew that the seas and oceans were full of plastic waste in varying states of decomposition. But we did not know that plastic could be absorbed by the human body. This realisation steps up global awareness of the urgency of the danger.

Players from all horizons, including public authorities, industrial producers and consumers, financial institutions and environmental NGOs, are now seeking to address a situation that appears increasingly out of control. It was high time.

Plastic was invented in 1907 in the form of bakelite and then cellophane, and quickly proved a huge success, particularly from the 1950s onwards. US soldiers liberating France were the first to introduce French women to stockings made of nylon, invented in 1937. Tupperware, launched in 1946, embodied the success of plastic in developed countries for many years – until the first ecologists began to speak out against a material that had long symbolised modernity. Plastic has numerous qualities, being light, waterproof, hygienic, malleable, solid, durable, economical and versatile, and has long gone hand in hand with the economic growth of countries. Plastic today is everywhere, in our kitchens, bathrooms, clothes and electrical appliances. A US journalist recently calculated that we come into contact with 200 plastic objects every day, more than all other materials combined.

But plastic’s qualities are also proving to be its shortcomings, as it is rot-resistant and does not degrade easily. The rise in environmental concerns and the explosion of single-use plastic (now accounting for 40% of world production) driven by consumer demand have made the definitive elimination of plastic waste an essential issue. 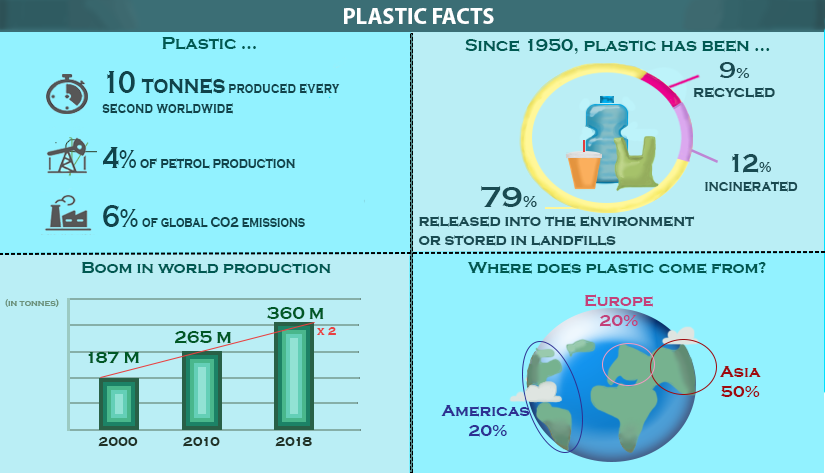 Human beings have produced nearly ten billion tonnes of plastic since 1950, of which only 12% has been incinerated and 9% recycled. The rest has ended up in the environment. At best, in “controlled” landfills where waste is often buried and more or less insulated from the ground, at least in developed countries. And at worst, in illegal landfills, where it decomposes in open air, producing methane, or directly into the environment, where it is dispersed by wind, rain and water.

Current practices in plastic waste elimination are environmentally unsatisfactory. Incineration uses large amounts of (mainly fossil-fuel) energy and burning plastic produces CO2 and other pollutants. While we now know how to process incineration residues (for example, by using them as sub-layers in road construction, at least in developed countries), we continue to burn PVC, which emits dioxin. This is far from the norm in emerging and intermediate countries, where incineration goes unsupervised and emits highly toxic pollutants such as dioxin and benzene into the atmosphere close to urban areas.

Neither do landfills offer absolute guarantees of environmental respect. The decomposition of plastic into micro-particles, combined with the release of acid (from non-recycled batteries for example), emits extremely toxic substances that damage our endocrine systems and are thought to cause cancer.

In a recent landmark report, the World Wildlife Fund (WWF) estimated that 37% of world plastic waste is currently not managed in an ecological manner. Rather than being collected, it is discarded in the environment or dumped in uncontrolled landfills. The situation is a source of extreme concern, as 80% of this waste will pollute ecosystems, and the oceans in particular. The WWF estimates that 80% of sea pollution comes from terrestrial sources.

The oceans are becoming the world’s trash can, as seen in the harrowing images of plastic-strangled marine animals and the vertiginous pollution figures reported on widely in the press and the social networks. A major revelation came in 1997 with the discovery of gyres, powerful ocean currents where decomposing plastic accumulates to form “plastic continents”. The largest such continent, located in the northern Atlantic, is six times the size of France.
Ellen MacArthur’s wake-up call at the 2015 World Economic Forum in Davos, announcing that the oceans would contain more plastic than fish in 20 years if no action was taken, served to boost awareness. But it is difficult to quantify the extent of plastic pollution, as we now know that plastic eroded by salt and sun ends up as micro- and nano-plastic invisible to the naked eye. And this is perhaps the most alarming issue. These particles are absorbed by the plankton, crustaceans, molluscs and fish that ingest them. Plastic is thus to be found at the origin of the food cycle, eventually contaminating human food. 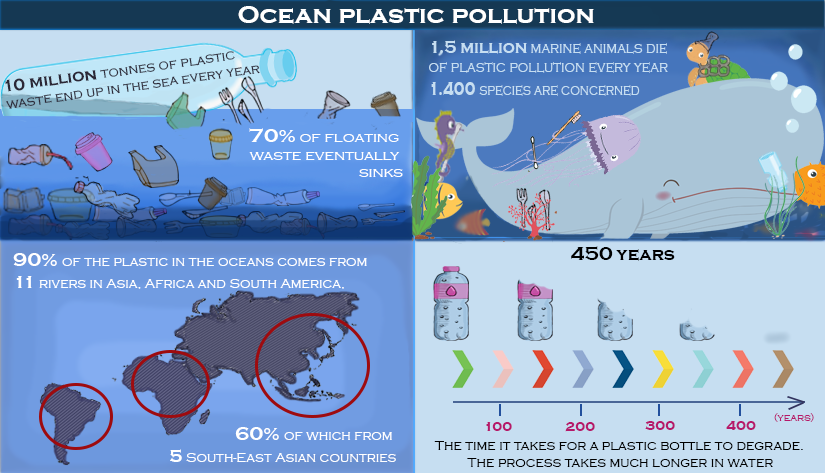 Research has begun to show that human beings ingest and breathe, without knowing, a large quantity of plastic nanoparticles. An American adult ingests and breathes over 50,000 particles every year. The first source of these particles is water, and bottled water in particular, which contains 20 times more plastic than tap water. Other major sources are seafood, beer and salt, as well as tyre abrasion, which generates airborne micro-plastics.
This constitutes a true warning signal for public opinion and governments, especially since initial studies demonstrate that these particles could enter human tissue and cells, previously not thought to be the case. We are only now starting to assess this risk, but the initial findings are far from promising. For example, the plastic microparticles omnipresent in our clothing and cosmetics are dispersed on every wash and end up in waste water, where they are almost impossible to treat, the consequences of which have barely been studied.

The situation is alarming and stands as a threat for humanity as a whole, with long-term effects on our metabolism, cancers and malformations that are proven but difficult to quantify. Even worse, plastic in all its forms, from the largest to the smallest, is an excellent vector for the transport of bacteria, both in the body and in the oceans. The threat for biodiversity and aquatic ecosystems is clear and present. Not only are invasive species spreading more easily from one continent to the next thanks to plastic, but the latter also binds pathogenic micro-organisms that are dangerous for humans and animals. The risk, then, is very real, and there will be environmental, health and economic consequences, for example on aquaculture, which we are only beginning to study.

Ocean pollution alerts have served to raise awareness. In a somewhat utopian spirit, some people advocate collecting plastic from the oceans, but it would appear that the problem needs to be tackled at the source, across the entire cycle of plastic production, use and elimination.
An entire chain of responsibilities is at stake. Each link in this chain has long tended to shift the blame onto the next. Chemists and plastic producers pass the buck to their customers, large food and health-and-beauty corporations, who in turn point their finger at the irresponsible behaviour and habits of consumers, who bemoan the shortcomings in the collection systems of local authorities. In this last respect, fewer than 10% of plastic bottles in Paris are collected, sorted and recycled, and the city still fails to selectively sort public trash cans. Meanwhile, the equivalent of a skip of waste is dumped into the sea every minute.

The public begins to rally

However, governments have begun to take measures. One key focus is single-use plastic, which is omnipresent, invasive and difficult to recycle. France was the first country to ban disposable plastic bags, numbering some one billion a year. The consumption of these bags has subsequently fallen 90% in 15 years. Under the French law on the energy transition, plastic cups and plates will be banned by the end of the year.
Meanwhile, the European Union recently made several firm commitments, banning plastic tableware, cutlery and cotton buds by 2021 and single-use plastics by 2030, and collecting 90% of plastic bottles and doubling the share of recycled plastic waste to 30% by 2025. But this is just a part of the problem, as single-use plastic accounts for a mere 4% of world plastic production. So what needs to be done with this ubiquitous material, one that now poses a threat to nature, human beings and biodiversity? Is the situation out of control? Solutions nevertheless exist. They will call for the collective and resolute involvement of all the players in the plastic chain, from producers through to consumers, backed by firm political determination at both national and supranational level.

“The whole world can be plastified, and life itself, as it appears we are starting to manufacture plastic aortas.” Seventy years later, the prophecy of Roland Barthes in his 1957 book Mythologies has been fulfilled. Plastic is all around us in our daily lives, from the highest glacier to the deepest ocean bed. It is on our plates, in our stomachs and no doubt already in our vital organs. And it kills – animals and, perhaps, human beings. Plastic is a global problem because it travels like pollution and carbon dioxide. Solutions exist and can be implemented. But it will take us a long time to learn to live with – and without – plastic