Of benefits to switch from assisted driving to driverless vehicles

Of benefits to switch from assisted driving to driverless vehicles

Road accidents cause 1.2 million deaths a year. 90% of these accidents are the result of human error. It would therefore seem logical – urgent, even – to employ driver assistance systems where human capabilities fail.

The first driver assistance systems emerged in the 1980s and were an almost immediate success. Recent technological developments (ultrasonic sensors, radar and cameras) have led to further progress in accident prevention. Now, by combining these detection systems with navigation data and a genuine electronic brain, fully autonomous, automated driving which causes no accidents is a realistic prospect. The potential benefits for individuals, the economy and society are, of course, huge. This market represents a considerable opportunity for automobile manufacturers on the cutting edge of this field.

The benefits of autonomous driving are numerous, and the technology is almost here.

The facts speak for themselves: driving kills. Road accidents may cause over 1.2 million deaths a year, and be responsible for more than 50 million injuries. Over 90% of these accidents are the result of human error.

Unfortunately, given the ageing of the global population and the increasing distraction caused by a hyper-connected world, it is hard to be optimistic. Besides the dramatic human cost, the societal and economic costs are also high. In the United States, the economic cost of road accidents is estimated to be $300 billion, or 2% of GDP. This includes the cost of property damage, productivity losses and medical and legal expenses. It would therefore seem logical – urgent, even – to employ driver assistance systems where human capabilities fail.

The origins of automated driving technology

The first driver assistance system emerged in 1980, when Bosch launched the Antiblockiersystem (ABS), or anti-lock braking system, which prevents wheels from locking up during hard braking.

When a driver suddenly sees an obstacle, the automatic reaction is to slam on the brakes. This makes the wheels lock up, causing the driver to lose steering ability and control of the vehicle. ABS works counter-intuitively, relieving pressure on the brakes and helping maintain steering control. This is a concrete example of a machine compensating for the actions of a human.

In the mid-1990s, ABS evolved into electronic stability control (ESC), a computerised system with independent wheel braking that helps prevent skidding during sharp turns (oversteering). ESC became massively successful. By 2007, the technology was installed in over 30% of vehicles, and was available in more than one in two cars in 2013 (100% in North America, 78% in Europe, 39% in Asia). It is anticipated that two-thirds of the world’s cars will be equipped with the technology by 2018.

There are several reasons for the success of these technologies. Thanks to their proven effectiveness, demand for them rose quickly among consumers hoping to make their vehicles safer.

They also became major selling points for car manufacturers. Over time, these “active safety features” began to supplement older, “passive” features like seat belts and airbags, and were integrated into the performance assessment programmes of independent international bodies like Euro NCAP (European New Car Assessment Programme), which evaluates the safety of vehicles on a five-star rating system. Manufacturers quickly learned that they needed to obtain five stars to remain relevant and competitive. In a virtuous circle, the Euro NCAP tests became increasingly demanding year after year, resulting in massive improvements to vehicle safety over the past two decades.

Finally, the use of these technologies intensified under regulatory pressure. Indeed, regulators quickly seized the opportunity to reduce the number—and cost—of accidents, and made the installation of driver assistance technology mandatory.

In 2004, European legislation ordered manufacturers to install ABS on all production vehicles sold on the European market. The mandatory installation of ESC began being phased in starting January 2012. It is interesting to note that car manufacturers have always acted ahead of regulations in this area, while the same cannot be said of emissions and pollution control systems, which are much more difficult, if not impossible, to monetise.

This process will be accelerated by the falling cost of component parts. These essentially electronic devices are becoming cheaper at a rate of 3% to 5% per year. 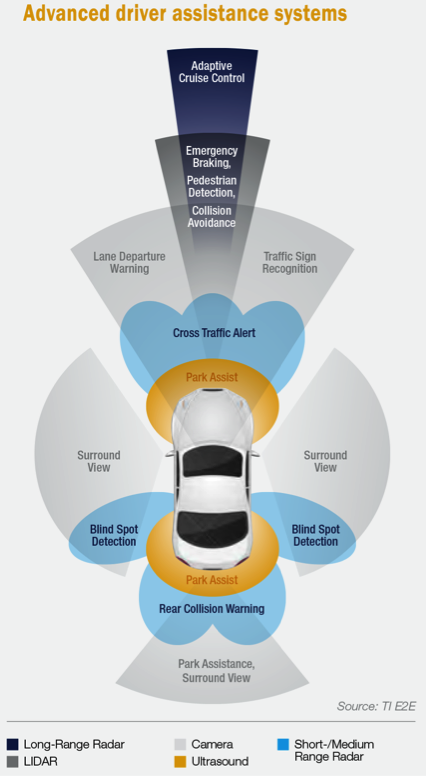 From assisted driving to driverless vehicles

If technology can effectively stand in for human action and save lives, could it go beyond driver assistance systems and lead to fully autonomous or automatic driving?

For this vision to become a reality, the detection systems described above would need to be wired into a sort of electronic brain. Advances in artificial intelligence prove that this is a realistic prospect. By combining the data captured by sensors—which can digitally recreate the outside environment—with map data, nearly nothing now stands in the way of a car moving independently from point A to point B. The US National Highway Traffic Safety Administration (NHTSA) has identified four “levels” of vehicle automation leading to fully automated vehicles.

In the meantime, improvements can and will be made to the existing model. Engineers from Google are conducting tests in real-world conditions, travelling thousands of kilometres on board autonomous vehicles in order to refine their mathematical models and equip the cars with human-like reflexes.

For example, if a sensor detects a ball on the road, the vehicle will avoid it and immediately continue along its route, whereas a human driver would naturally slowdown in case a child was running after the ball.

For cases like these, the “robot” driver must be trained by humans. Naturally, this raises important questions. For example, would the car “voluntarily” cause an accident in order to avoid hitting a pedestrian? In the coming years, machine learning and artificial intelligence will also refine the vehicle’s abilities. Furthermore, the increasing connectivity of vehicles will undoubtedly improve driving capabilities.

For instance, a broken down car could send an alert to prevent other vehicles from approaching too quickly and suggest alternative routes to reduce further risk (for example, when a turn obscures the visibility of an accident).

Meanwhile, driverless vehicles could reduce the number of accidents – and therefore their cost – by 90%.

There would also be considerable indirect benefits. For example, automation – and the resulting optimisation of routes – could reduce fuel costs. One study suggests savings of €50 billion from fewer accidents, less gridlock, improved traffic flow and optimised route capacity.

To this we could add the benefits of higher productivity. By their very nature, driverless vehicles allow their occupants to attend to other activities. Much value could also be created by re-allocating hours spent driving to other activities, work-related or otherwise. For example, taking the average cost of an hour worked and applying the average commuting time per employee (limiting the analysis to employees who are realistically able to work in a vehicle), a very significant figure of €900 billion emerges.

Finally, there is the financial opportunity associated with expanded mobility for new groups of people. Indeed, driverless vehicles could assist millions of people around the world who currently lack mobility due to age or disability.

…Opportunities for some automotive suppliers

A recent study by McKinsey estimated that by 2030, up to 50% of new cars sold around the world will be partially autonomous and 15% will be fully autonomous.

The cost of the additional features needed for a partially-autonomous car is estimated at $1,000. For fully-autonomous cars, the figure is $4,000. As for the remaining 35% of cars, about $300 of more conventional driver assistance functions – which will certainly be mandatory by 2030 – may be needed. Adopting the numbers used in the McKinsey study and assuming a global car market of around 100 million vehicles, the market for additional features should amount to €120 billion (a study by Goldman Sachs even points to a $180 billion number). This enormous market will be shared by a number of automotive suppliers, including manufacturers of sensors, mapping system providers, developers of connectivity systems (and by extension, telecom operators), human-computer interaction human-machine interface specialists and, of course, software providers. The trend toward automation could also accelerate the spread of electric cars. Indeed, the more efficient use of vehicles resulting from driverless technology (fewer cars on the road, but used more frequently) will help offset the high cost of some of the components used in electric cars, particularly batteries. Thus, the wider adoption of automation technology will indirectly benefit the suppliers involved in the expanding electric car market.

Naturally, there will also be losers. For example, what is the use of rear-view mirrors when cars are equipped with multiple cameras and sensors? And with accident rates almost certain to plunge, some passive security features like airbags could become obsolete. And what will happen to steering wheels when vehicles can drive themselves, as demonstrated by Google? Meanwhile, other automotive suppliers will remain immune to the disruption. Although currently seen as suppliers of low value-added products, they could eventually win the favour of some investors. For example, we will almost certainly need seats and tyres, even in the cars of tomorrow!