Medical technologies, the building blocks of a new world

Medical technologies, the building blocks of a new world

Medicine, like the industrial and financial sectors, has experienced a spectacular rate of change over the past few decades. Today, this underlying trend appears to be accelerating, judging by the space given over to digital healthcare at the last CES in Las Vegas. Here’s a review of the proliferating fields of technology, and their vast potential.

The processing, analysis and storage of data, along with robotics, artificial intelligence, machine learning and connected objects, are all technological breakthroughs offering a vast array of potential applications for the medical world. So, what will the medicine of tomorrow look like? Experts believes it will be more precise, preventive, personalized, responsive, participative and digital. Not surprisingly, the digital healthcare market has already experienced explosive growth. Estimated to be worth $144 billion in 2018 1, it is expected to pass the $200 billion mark by the end of 20202. While the history of medicine has always been characterized by disruption (such as the arrival of antibiotics in the middle of the 20th century), the current period certainly marks a turning point. The rise of new medical technology (Medtech) has revolutionized diagnostics (with artificial intelligence), technical procedures (robotic surgery) and consultations (telemedicine). And there is no shortage of examples of what, until recently, would have seemed to belong to the realms of science fiction, such as research into the injection of microrobots into the bloodstream to perform targeted treatments3. François Sigaux, Scientific Director of Fundamental Research at France’s Alternative Energies and Atomic Energy Commission (CEA)4, believes that R&D spending on the medicine of the future will focus on three areas. Supported by advances in chemistry, synthetic biology and robotics, the first of these involves “multidisciplinary approaches to developing medical equipment for diagnostic or therapeutic use, or a combination of the two.” The second area will be the development of personalized biotechnology based on parts of the patient’s body, such as the emergence of organs-on-chips. “The final area is digital technology, which will bring together all aspects of the medicine of the future, and will create a healthcare system that is equipped with self-learning capabilities.”

In strictly factual terms, the medicine of the future is already a reality today, and there are plenty of spectacular applications. Robotic surgery is one of the most impressive advances, with the Da Vinci robot, complete with its four arms and miniature pincers, being just one example. 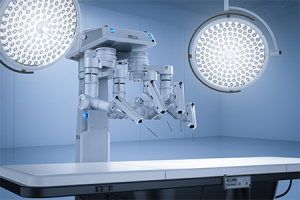 For surgeons, robotics offers a guarantee of substantial gains in precision, visualization and dexterity. For the patient, the technology means less invasive surgery, smaller scars and a reduced risk of complications or after-effects. More than 4,500 such robots are in use today, 125 of them in France5. This particular revolution was led by a Californian start-up, Intuitive Technology, which today has more than 2,750 patents and a market capitalization of around $65 billion.

Another field to have witnessed major progress is telemedicine. Between B2B applications (teleradiology, telepathology, telecardiology, etc.) and those in B2C (remote patient consultations), the market could be worth €27 billion in 20266. A product like LabPad from Avalun7, for example, is positioned as a pocket-sized laboratory for carrying out biological tests either at home, at a healthcare center or on the premises of a healthcare professional.

One drop of blood is enough for a test, and the results are available almost instantly. When linked with test laboratories and healthcare professionals, it enables treatment to be adapted quickly when necessary, providing a more accurate match for the patient’s needs. At the same time, artificial intelligence is making it possible to identify connections within virtually unlimited amounts of data. In particular, there is huge potential in the fields of radiology and cardiology for finding correlations that will help the targeting of future pharmaceutical molecules, diagnostics or genomics. A Google subsidiary, Verily, is already able to carry out a reliable cardiovascular examination by analyzing a photograph of the retina of a patient’s eye.

Such advances are not only a reflection of the healthy appetite among major laboratories for innovation. They are also the result of alliances with their selected partners. “Although the objectives are different, from one organization to another, there’s one model that seems to be dominant – the use of GAFA,” underlines Alexandre Templier8, CEO of the Quinten consultancy, referring to Google, Amazon, Facebook and Apple. In the space of a few months, four laboratories (Sanofi, Novartis, Pfizer and Otsuka) have become official partners of Verily. For its part, Apple is developing solutions for centralizing medical data (analyses, scans, prescriptions, etc.) and placing it in the hands of the patient, so that it can be used medical purposes. In 2019, Morgan Stanley analysts have estimated that Apple’s revenues from healthcare in 2027 will be $90 billion9. As for Amazon, the company is working to reduce healthcare system costs by focusing on its own employees, courtesy of a jointly-owned company with JP Morgan and Berkshire Hathaway.

The involvement of GAFA – for harnessing the power of data – opens up a major possibility: to treat each patient in an individualized way, according to their specific biological and genetic make-up, while also allowing for factors that might affect the development of a disease and the effectiveness of its treatment. 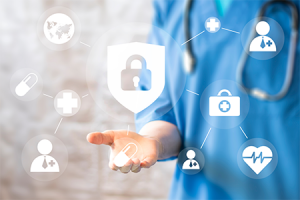 However, this major change also has a corollary: the need to ensure the highest possible level of data protection. A highly sensitive issue, the use of this data is unimaginable without a guarantee of confidentiality and security. “Let’s make sure that this Promethean promise doesn’t turn into a mercantile exploitation of healthcare data. Nation states are not the owners of this data, but they do need to be its guarantors,” warns Alexandre Templier.

As the French government prepares to work with Microsoft to store healthcare data on its Health Data Hub (HDH)10, a group of experts in health and medical IT have expressed their concerns11 about opting for a private-sector organization, highlighting the fact that the information has come from hospital centers, pharmacies and shared medical files. “The plan is for this data to be stored on Microsoft Azure, the public cloud of the American giant, Microsoft . This choice goes to the very heart of our concerns,” the group said in a newspaper column. “What’s more, the HDH is being developed as a centralized model, which means that the consequences of a theft by hackers would be even greater.” Calling for the development of self-managing cloud storage, the group believes it is essential to have control over the technology being used and to prevent the privatization of public healthcare. Such views underline a major challenge for the years ahead: to establish a framework that will foster revolutionary medical innovation — without creating new risks that could have potentially devastating consequences.