Is it time to stop seeing travel as a succession of different forms of transport, and to think in terms of an overall mobility service instead? Such is the promise of Mobility as a Service (MaaS), a radical approach could soon appear in cities around the world. However, as the analysis shows, there are several challenges to be overcome.

Trains, metro networks, buses, trams, taxis, hybrid bikes, road bikes and moped rentals, not to mention carpooling, car sharing and e-scooters; we have never had so many forms of transport to choose from. And yet, is it really becoming easier to get to your destination? Not necessarily. In practice, every form of transport requires the use of an app, or a specific tool. To use several different modes of transport in succession requires means making fairly clever calculations, and the results are often disappointing.

To deal with this complexity, the concept of Mobility as a Service (MaaS) take a radically different approach: rather than juggle different apps to make a reservation or find information, the user need only visit a single digital platform that brings together all the relevant service providers (transport companies and services, along with the authorities responsible for pedestrian areas, car parks, etc.). With just one app, people can find the best route and most suitable forms of transport, and then purchase all the tickets required.

This model, which is attracting considerable interest in major metropolitan areas on every continent, has been created by MaaS Global, a Finnish start-up that developed Whim, the benchmark app for such a service. Since December 2017, the company has been offering all-inclusive mobility solutions on a subscription basis to residents of Helsinki. Once people have signed up, they can arrange journeys by bus, taxi and/or car rental, or shared bicycle. While the basic version of the app offers a single point for purchasing and providing receipts for tickets, the main offering is a ‘no limits’ concept that provides unrestricted access to various forms of mobility. These features make Whim the most advanced solution on the market, as it can offer users different mobility packages at different prices, just like a travel agency. 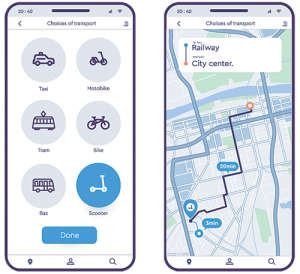 Ease of use is not the only attraction of MaaS. These solutions are based on a profoundly different approach to transport: namely, to replace a personal possession with the use of a service that is available to every resident in a given area. A credible alternative to the use of a private car is in the making…

For urban and rural areas alike, there are obvious environmental benefits to developing public transport, cars sharing and carpooling. Those benefits are even clearer when it comes to the more advanced form of MaaS, as envisaged by the Boston Consulting Group1, where the platform can encourage the use of low-carbon mobility by offering reduced prices for public transport during off-peak periods, for example.

MaaS is also a partial response to one of the major challenges of the coming decades: to move around cities that are becoming ever larger2. Already underway in most of the world’s major metropolitan areas, the phenomenon of urban sprawl inevitably leads to a corresponding rise in the time spent commuting to and from work. According to a study in 20173, the daily round trip for employees in leading economies takes an average of 69 minutes, a figure that rises to 79 minutes for Americans and 97 minutes for Israelis. This trend also needs to be considered with another — that by 2050, about 70% of the world’s population will be living in cities or other urban areas4.

The end of ‘transport’?

While the possibilities offered by MaaS are encouraging, the practicalities of bringing together an area’s different forms of transport on a single platform are far from simple. And the biggest problem is not a technical one. “We have to do away with the very term ‘transport’,” says Stéphane Schultz, an innovation consultant who specialises in hybrid systems for the web and urban environments. “It’s an idea that implies working in silos, where one authority manages the buses, another handles the regional coach service, yet another is responsible for car parks, someone else is in charge of pedestrian mobility or retail centre car parks, etc. etc.”

So, who is best placed to bring all these services under one umbrella? The options include start-ups that are given permission to do so by local authorities; transport operators; and giant corporations that either buy up or partner with other transport players, such as US companies Uber and Google, and Didi or Grab in China. The potential business models, like the prospective operators, are numerous. Another option would be to use the local authorities, given their knowledge of the area and its mobility issues, along with an image among the general public of ‘neutrality.’ The latter looks to be the preferred model in France where the Loi d’Orientation des Mobilités (Guidance Law for Mobility) mandates that by March 2021, local communities in a council district should choose the body in charge of mobility for their area – or responsibility will pass to the regional council5.

However, there is a note of caution from Anne Berner, Finland’s Minister of Transport, on the subject: “If the mobility platform is in the hands of a major public authority, but is connected to private operators, it will not sufficiently change people’s minds (about transport). There will not be enough room for innovation6.”

Whatever the model, active support from central government appears to be essential. In Finland, the launch of Whim was preceded by a far-reaching transport law7 that obliges public operators to open up their IT and payment systems to private operators.

A vital redefinition of sharing

The actual delivery of a MaaS system raises an even bigger issue. “Another key challenge is to promote the idea of sharing a common service,” says Stéphane Schultz. “Because the use of digital tech, and social networks in particular, have created a huge focus on individualism, where everyone can choose the communities they want to be part of.” He believes that using public transport is also about people being able to live together. “You need social engineers and designers – professionals whose job it is to develop common practices.” The aim here is to restore an individual’s willingness to accept the sharing of time, space and even action, particularly with carpooling, for example.

It’s a goal that has particular resonance after an unprecedented year like 2020, which was marked by a sharp drop in the use of public transport and a significant rise in other, more active forms of mobility (bikes, e-scooters, etc.). But surely, isn’t such a situation ideal for introducing a way to make journeys more seamless, virtuous and sustainable? The answer lies in the leading players’ ability to collectively seize that opportunity.