People’s expectations of companies are changing. Increasingly, citizens and consumers want to see them play an active role in tackling the major issues of our time. While the environment is the main challenge, it’s not the only one. Social issues, and inequality in particular, are growing in importance.

The past decade can be viewed as a period of slow, but unstoppable realisation. NGOs, institutions and citizens around the world have sounded the alarm in a bid to raise awareness about the climate emergency. Even more than nation states, leading multinational corporations have been singled out for attention and it has become impossible for them to ignore the issue. As a result, major companies have made a growing number of announcements in recent years, though not without raising suspicions – sometimes justified – of greenwashing. A target of being carbon-neutral by 2025 (Kering), a program of disengaging from most the environmentally damaging industries (Axa), 100% offset of the CO2 emissions of internal flights (Air France), and a $400 million investment in clean energy research (Total) are among such announcements. Yet the progress being made is real. Environmental performance is increasingly a factor in the strategies of large companies, while the executive committee members responsible for the subject are gaining in authority. The decision by Europe’s leading commercial real estate company, Unibail-Rodamco, to link a portion of its executives’ pay to environmental performance speaks volumes.

Like the environment in previous years, social issues are now seen to be of growing importance. Faced with increasing demands for equality around the world, national governments are beginning to put forward timid solutions to what could become a major challenge for the future of democracy. In turn, the private sector has also become involved. As with the environment, combating inequality is becoming a key focus for a company’s image, and specifically its Corporate Social Responsibility. In fact, CSR commitments are now essential for improving a company’s image, both internally – to enhance employee engagement – and externally, to win new customers.

Corporate investors are not naive about such commitments. Aside from the moral aspect, CSR is also a way for companies to demonstrate their long-term strategic vision. In turn, this provides financial analysts with reassurance about the company’s prospects well into the future. The growth in Environmental, Social and Governance (ESG) funds, which rose 34% in two years to be worth $30.7 billion in 20181, are a clear illustration of this new reality.

HOW TO FORMALIZE SOCIAL ENGAGEMENT 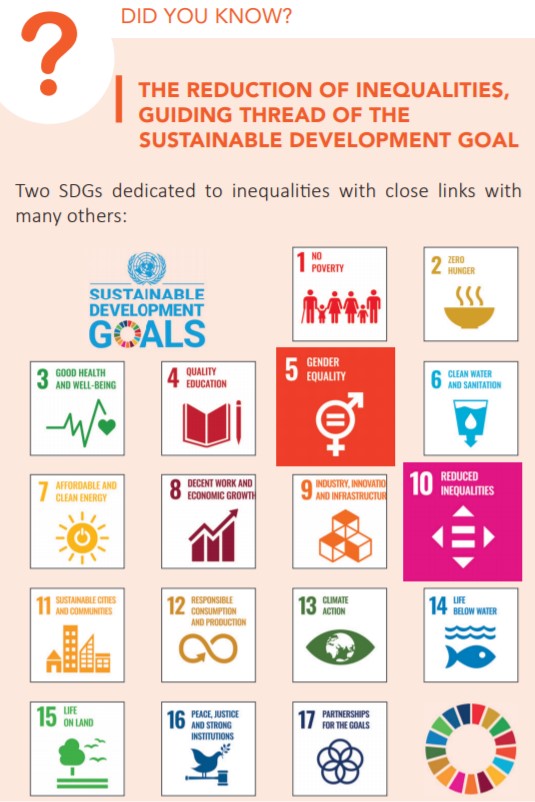 To support this underlying trend, new action plans are being drawn up for the benefit of companies. The aim is to take action – and to demonstrate that – by combining the profit motive with social engagement. Business for Inclusive Growth (B4IG) is one such initiative2. Launched in 2019 and coordinated by the OECD (Organization for Economic Cooperation and Development), it brings together 34 multinational companies, such as Johnson & Johnson and Schneider Electric. All of them are committed to “intensifying their efforts to advance human rights at every stage of the value chain.” As Emmanuel Faber, CEO of Danone, explains: “In many G7 countries, the erosion of the middle classes, which are the foundation of any market economy, should be a cause for alarm, as it has been proved that beyond a certain level, inequality weighs on an economy.” It is therefore not “a question of ideology” , but one of “realism,” to “call for collective and inclusive action, by governments and by companies.”

Another option for businesses is to be part of an approved label scheme. The best known is probably B Corp, whose slogan is “Don’t just try to be the best in the world, but to be the best for the world.” Present in 60 countries, B Corp is designed for companies that have responsible practices and clear ESG objectives. The idea is to avoid just publicizing good intentions, but to have tangible results on specific issues made public. That said, it is worth highlighting one of its limiting factors – the companies themselves choose the targets against which they will be judged.

In the same spirit, France passed the PACTE law3 in May 2019, creating the label of “company with a mission.” This focuses on firms that set themselves one or more social or environmental objectives. A key point here is that such an approach must be carried out with all of a company’s stakeholders and must be covered by a formal commitment from shareholders. A leading insurer, Maif, has become the first to change its status to a ‘company with a mission’ as specified by the new law. Portraying itself as ‘the militant insurer’, the group wants to use its new corporate status as a differentiating factor in a highly competitive market. Its CEO, Pascal Demurger, published a book in 2019 with a title that sums up his belief: “The company of the 21st century will be political or it won’t exist4.” That approach may seem provocative today, but it could be essential in the years ahead.