Diabetes affects the day-to-day lives of more than 425 million people around the world and is one of the century’s biggest health challenges. The epidemic is steadily gaining ground and is set to affect 10% of the world’s population by 2040.

More than one type of diabetes

Diabetes causes the blood sugar level, known as glycaemia, to be chronically and abnormally high. This chronic hyperglycaemia is mainly due to a lack of, or the inefficiency of, insulin, a pancreatic hormone essential to the assimilation and storage of glucose by cells.

Contrary to some received wisdom, diabetes is not just one illness: it exists in two forms with diametrically opposed causes. Type 1 diabetes (10% of diabetics) is an autoimmune disease that usually affects children and adolescents; the pancreatic cells that secrete insulin are gradually destroyed by the patient’s immune system, resulting in insulin deficiency.

Type 2 diabetes, the most common form (90% of diabetics), usually affects older people. The disease mainly has its origins in family history, an unbalanced diet, lack of physical activity and excess weight. This unhealthy lifestyle disrupts the effectiveness of insulin and gradually wears out the pancreas, which ends up no longer being able to produce sufficient insulin.

The alarming human and economic cost of the diabetes epidemic

Diabetics are constantly battling to stabilise their glycaemia. Permanently high blood sugar levels eventually cause widespread vascular lesions affecting the heart, the eyes, the kidneys and the nervous system. Diabetes is one of the leading causes of cardiovascular disease, blindness, kidney failure and lower limb amputation.

Diabetes-related complications led to 4 million deaths in 2017, equating to one death every eight seconds. Diabetes accounts for 10.7% of global mortality, higher than the number of deaths from AIDS, tuberculosis and malaria combined.

Beyond the human burden, diabetes also has a considerable economic impact on our healthcare systems, costing almost €740 billion, or 12% of global healthcare spending.

Faced with these alarming figures, new technologies will play a key role in preventing diabetes and lessening associated complications. One of the major challenges is being able to balance diabetics’ glycaemia over the long term to avoid or delay any complications. 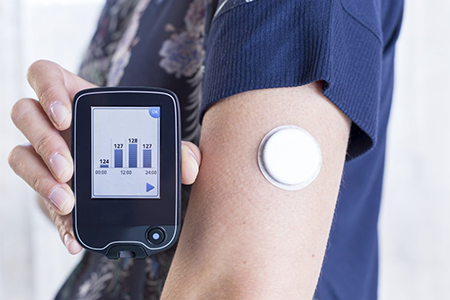 The ability to continuously measure glycaemia using a sensor attached to the arm is a major technological development. Just by scanning the sensor, a diabetic can view his or her glycaemia in real time via a smartphone and adjust his or her insulin dose accordingly. Apart from the day-to-day convenience offered by these types of solutions, numerous studies have shown that diabetics who use them are more proactive in monitoring their glycaemia (13 scans a day), significantly improving the stability of their blood sugar levels and thus reducing the risk of developing cardiovascular disease.

Future technological advances will mean diabetics no longer even need to worry about managing their blood sugar: artificial intelligence (AI) powered by complex, self-learning algorithms will take care of it for them. Combined with sensors and an insulin pump, these AI systems will be able to calculate and administer the required dose of insulin at exactly the right time, without human intervention. This is the goal of developing the “artificial pancreas”. One of the technology’s pioneers, the French start-up Diabeloop, hosted at Le Village by CA Paris, has reported very encouraging initial results.

However, numerous obstacles remain along the path to an artificial intelligence system that can independently manage blood sugar levels taking into account exogenous factors affecting glycaemia, such as meals and physical activity. To achieve this goal, algorithms must not focus on an equation with just one variable, glycaemia; rather, they must form part of a multi-variable approach so as to provide an overall, personalised response. In order to treat and control diabetes, these algorithms will have to be able to understand lifestyle habits (diet, sleep patterns, etc.), patient psychology and the whole raft of factors directly or indirectly affecting the disease. Large volumes of data generated by connected objects will have to be fed into these algorithms, together with all results, analyses, doctors’ reports and genetic data, so to be able to draw up as complete a diabetic profile of the patient as possible.

Breaking through this barrier will allow algorithms to have a major impact on controlling diabetes. They will be able to act predictively, precisely determining the implications of a diabetic’s lifestyle on the long-term course of the disease and providing personalised solutions (precision medicine) to safeguard against complications.