By 2050, agriculture will have to feed more than 9.7 billion people.

Demand is increasing, while supply is being squeezed in two ways. First, driven by both economic development and rapid urbanisation, diets are becoming more diverse, with greater consumption of animal-based proteins. And, second, the amount of arable land is shrinking dramatically.

Massive investments in new equipment and innovations will be needed to boost future output, but rational development of new sources of production such as aquaculture are also essential.

Over the past 50 years, the global supply of fish for human consumption has risen more rapidly than the human population. Per capita consumption of fish has doubled, from about 10 kg in the 1960s to 20 kg today. In 2013, fish accounted for 17% of the global population’s diet of animal proteins and 7% of all proteins consumed. And almost one third of fish stocks are currently overexploited1. In light of all this, is aquaculture a sustainable way to feed the planet?

Aquaculture refers to all animal or plant production in an aquatic environment (fresh or salt water). It includes: 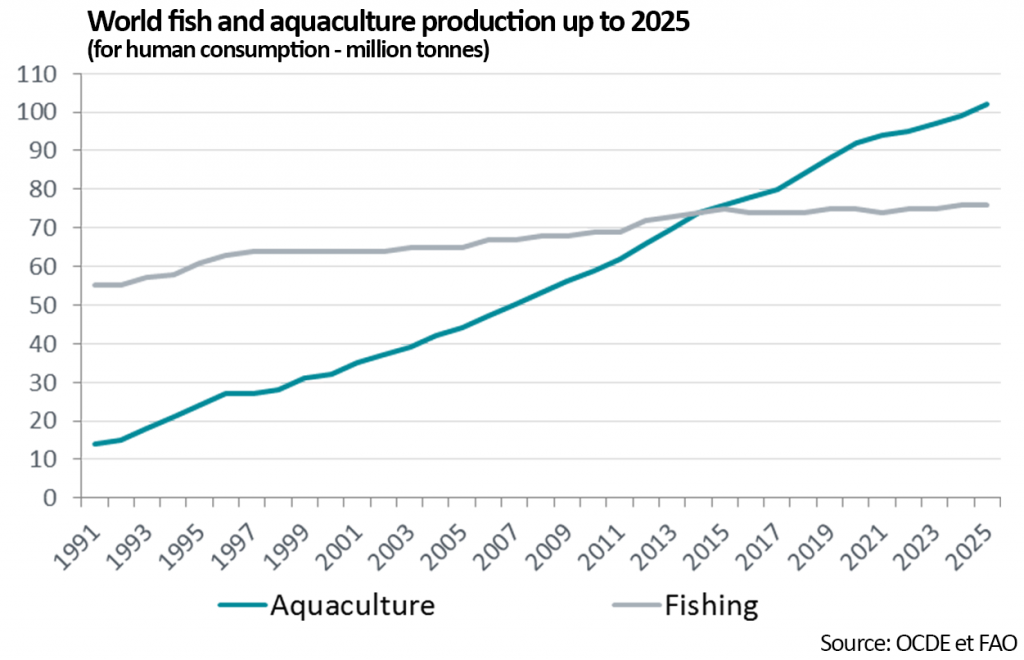 According to the United Nations Food and Agriculture Organization (FAO), global fish production has recently reached unparalleled levels. While total fishing catches have been relatively unchanged since the 1980s, aquaculture has provided a big boost to the global supply of fish. In 1974, aquaculture accounted for just 7% global output, vs. 41% in 2014.

China has a long, ancestral tradition of aquaculture and now accounts for more than 60% of global aquaculture output, head of India, Indonesia and Vietnam.

Even with the world’s second-largest exclusive economic zone, France accounts for barely 0.2%.

The EU currently accounts for just 9% of global output and the Asia-Pacific region, 74%, vs. 10% for Latin America, 5% for North America, and 1% for the Middle East and Africa.

Development must be on a sustained basis

with the objective of guiding all governments, institutions and companies towards inclusive and sustainable development, so that nobody is left behind. Several SDGs apply directly to fishing and aquaculture in particular. One of them deals explicitly with the oceans (SDG n°14: Life Below Water) and another, the fight against malnutrition (SDG n°2: Zero Hunger).

In 2017, aquaculture was a US$176 billion market, greater than the market for beef, and it is expected to continue expanding by 4.5% annually, to US$220 billion in 20222. Aquaculture is the fastest-growing food sub-sector3.

Researchers estimate that 13 million km² of ocean can be used by aquaculture, an amount that could allow the production of 15 billion tonnes of fish, or 100 times current world consumption4.

Today the sector is coveted by some very big players. For example, Cargill, the US agro-food giant, announced in July 2017 that it was responding to strong growth in the aquaculture industry by setting up a joint venture with Carisa, Ecuador’s second-largest shrimp producer. In August 2017, it expanded further with the €1.3 billion takeover of Ewos, a Norwegian company that is the world leader in salmon feed. In 2014, the Japanese group Mitsubishi acquired Cermaq, a Norwegian company and one of the world’s largest salmon farmers, which had been in the public sector.

Some clear benefits, but also many environmental issues

Aquaculture has many benefits in theory, the main one of which is to fight against food insecurity:

However, aquaculture has come under a number of criticisms, including many environmental ones.

It exacerbates the spread of disease and epidemics. In 2007, Chile, the world’s second-largest salmon producer was hit by an epidemic in its aquaculture farms. Its aquaculture industry was a big success but did not come with a commensurate level of regulation and inspections to prevent biological risks. Not only did it suffer losses of about US$2 billion, Chile’s production fell by half and it had to lay off tens of thousands of workers.

Aquaculture uses heavy amounts of antibacterial medicines and antibiotics, as intensive aquaculture promotes the spread of animal-borne diseases. The treatments used to fight those diseases spread into the environment, with a risk of promoting resistance to antibiotics and the rise of super-bacteria that may cause incurable diseases. 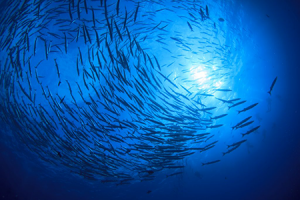 And, lastly, fish-farming itself is a challenge, between its benefits and drawbacks. Very often, farm-raised fish (tuna, salmon, carp, etc.) are fed with smaller fish. In fact, 3kg to 7kg of wild-caught fish are needed to produce 1kg of farm-raised fish, whereas in the wild 10kg of fish are needed to produce 1kg of carnivore fish. But this apparent gain in efficiency comes at the cost of exerting very heavy pressure on small species (e.g. anchovies and sardines), which could be consumed by people directly.

One good practice would be to promote the farming of herbivore or omnivore fish. Research is also under way to feed fish insect larvae that themselves would be fed with farming waste to avoid competition with other resources. Tests6 in Indonesia have found that 180 tonnes of palm oil cake would be needed to produce 60 tonnes of insects, and then 25 tonnes of fish.

Organic aquaculture is relatively recent and still involves only a small number of countries and species, but it is becoming more widespread, driven by demand from consumers who are ever more sensitive to environmental issues and to responsible production practices.

Organic aquaculture currently accounts for about 1% of European aquaculture.

The standards to qualify as organic aquaculture vary from country to country, but most require extensive farming in order to limit environmental impacts, the use of organic feed supplemented with live fish from sustainably managed fisheries, compliance with natural reproduction and the smallest possible use of veterinary products. In addition, producers must not use oxygenation systems to boost their output, or toxic bactericides to clean their cages.

Integrated multi-trophic aquaculture goes even further by bringing together several species of algae, oysters and fish, so they can feed off one another and be used reciprocally.

There is still a long road ahead, but all actors, both public and private, must become more aware of the demographic and environmental issues at stake. The UN’s sustainable development goals for 2030 are showing the way.