A look back at an accelerating phenomenon: disruption

A look back at an accelerating phenomenon: disruption

The recently theorised phenomenon of disruption is defined as a process whereby a product, a service or a solution disrupts the rules on an already established market. Technological progress, along with the globalisation of trade and demographic changes are now helping to spread it to every sector of the economy.

This is a never-ending process. The concept of disruption has only been around for a few years, but it is a phenomenon that can be found throughout history. It has only been conceptualised recently because of the technological acceleration that the world has experienced in recent times.

The latest major innovations, such as the Internet, connected objects, robotics, driverless cars and 3D printing, have in common that they have thrived with unprecedented speed and profoundly changed the way we live, consume and work, demonstrating the reality of the process under way. Although disruption began as an intangible phenomenon, its gradual and increasingly apparent concretisation meant that it needed to be defined in itself.

The concept of disruption, which was introduced in 1997, was theorised by Professor Clayton Christensen:

“An economic process whereby an innovative product
or service disrupts the established order on a market.”

One of the first examples of this came from IBM, when it made computers accessible to all, whereas in the past they were only available to a lucky few.

But the original definition is fairly restrictive. A disruptive company has thus to be :

• A start-up filing a patent for a new, less expensive model;
• Entering aggressively, from the bottom, a market whose leaders are not meeting the needs of some customers, described as forgotten;
• Benefitting also from a technological accelerator which allows it to quickly move upmarket.

If we follow this strict definition, companies currently considered to be disruptive, such as Apple, Tesla or Uber, no longer would be. Their innovations, business models and services represent a real break with the past, however, that have completely transformed consumer behaviour. These companies have clearly understood the following difference :

“The arrival of a simpler, more intelligent, more practical
and less expensive solution that is taken up by the consumer. “

Likewise, the concept generally reflects the substitution of one business model for another, incorporating Joseph Schumpeter’s notion of Creative Destruction, a secular phenomenon of which there are many historical examples.

Money, the plough, printing, penicillin, light bulbs, aircraft and the television are just a few examples of inherently disruptive innovations. The agricultural revolutions of the 17th and 18th centuries, like today’s digital revolution, are also akin to major phases of disruption.

“Historically, it was an intangible trend; a long-term phenomenon where the changes occurred over a hundred or a hundred and fifty years and were therefore not felt by the same generation, says Alexandre Janssen, the head of innovation at Deloitte EMEA. The technological development of the last thirty years is truly the cause of the phenomenon’s acceleration and therefore its conceptualisation”.

The current disruption is unique above all in its speed. As highlighted by Mark Zuckerberg, the co-founder and President and CEO of Facebook, two-thirds of the objects and products consumed today did not exist twenty years ago. While technological innovation may be the main driving force behind this exponential acceleration, it is also the result of a combination of other factors. The trend is driven as well by the globalisation of trade, demographic changes and environmental challenges. The current shift is multi-faceted precisely because several factors are at play.

This is in contrast to the industrial revolution, for example, whose direct repercussions mainly concerned production methods, whereas the current revolution is also shaking up living and consumption habits. The most familiar aspect of this change is undoubtedly technological.

Apple, for instance, “disrupted” the music industry at the start of the 2000s with iTunes, but is now moving into the collection of health data. The process is therefore irreversibly becoming more widespread. Yesterday it was music, today it’s banking, transport and food services… And why not education tomorrow?

Ultimately, the aim for groups like Apple, Facebook, Google, Amazon and others will be to become leaders in the connecting and management of all the data platforms. 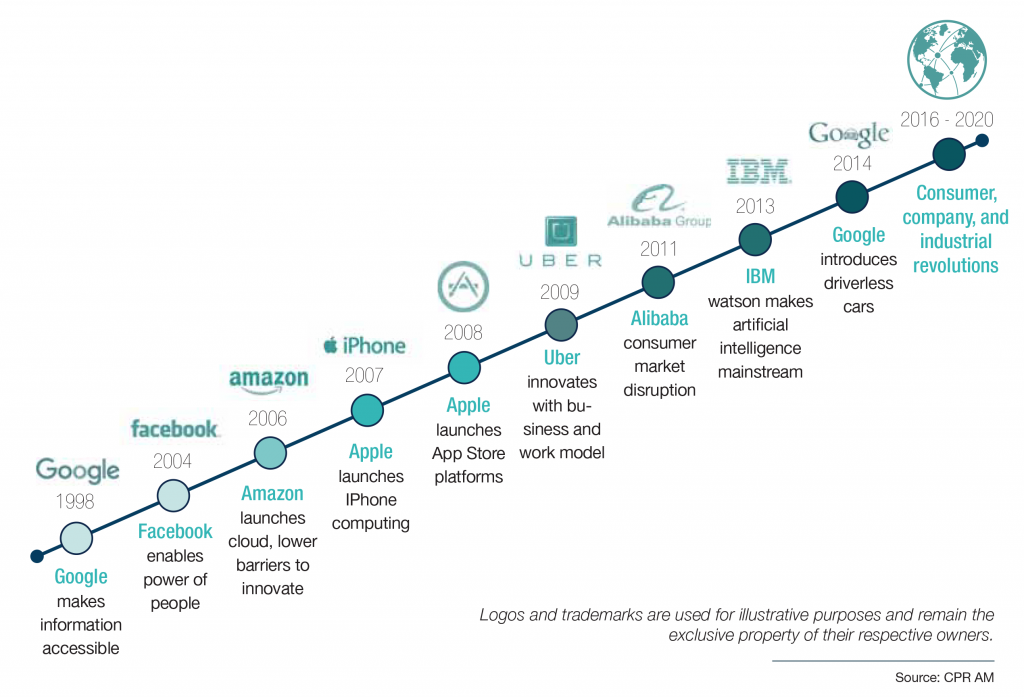 The current disruption is already shaping the world of the future. The economic value of this emerging universe is huge, but not always clearly delineated. At the heart of this trend is the fact that today’s disruptors will surely become tomorrow’s disrupted ones. The process is nevertheless irremediable: disruption is everywhere and affects everyone.