5G: Disruptive and hostage to a geopolitical storm

5G: Disruptive and hostage to a geopolitical storm

Touted as a disruptive technology enabling more agile network design and facilitating innovation, 5G is set to transform whole swathes of industry. Automotive, transport, healthcare, energy, media, agriculture and, of course, industry in the broadest sense: all are rethinking their future thanks to the digital transformation and the development of the Internet of Things. By 2030, there are likely to be some 500 billion connected objects worldwide.

This transformation is giving rise to new uses, and thus to new services – which de facto require new business models: a paradigm shift set against the backdrop of the major industrial challenge of 5G.

Spectrum: a limited but essential resource

The information that travels across mobile networks uses radio waves. These resources belong to states and constitute a key challenge for telecoms operators in the race to deliver 5G services. They are often allocated to operators through auctions. 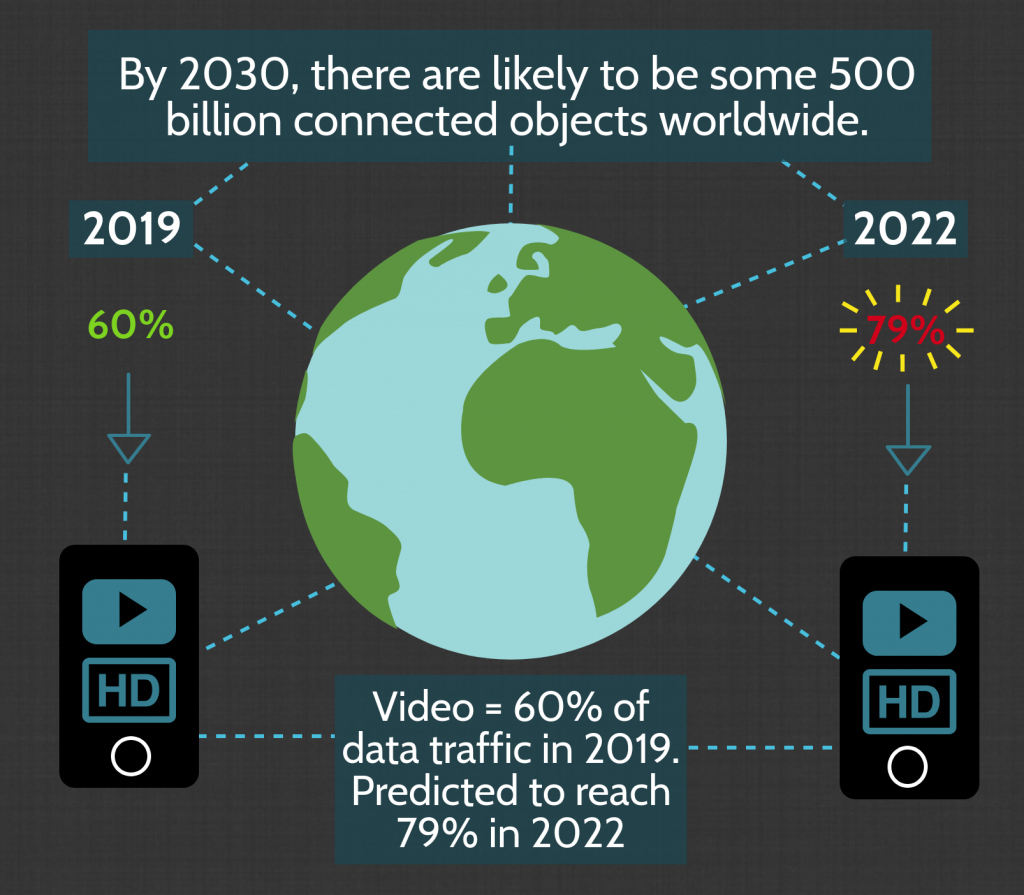 The risk of prices reaching eye-wateringly high levels is real, as was the case in Italy in October 2018, when the total price of all frequency blocks up for auction reached a staggering €6.55 billion. Faced with growing consumption of mobile data and the resulting need for ever more capacity, these spectrum resources, while essential, are also far from infinite.

And this equation is not an easy one to solve when you consider that bandwidth-hungry video, which currently accounts for over 60% of mobile data traffic, is set to account for 79% in 2022.

Rolling out network infrastructure requires a high level of investment, averaging 18-20% of revenue for leading European Union operators, not including the cost of buying spectrum. This complicates the economic profitability equation for operators, especially given that the associated business models have yet to be built.

However, work is underway to standardise radio interfaces and harmonise frequencies worldwide. This work, which should be completed by the end of 2019, will ensure a consistent rollout for large-scale 5G networks, the first of which are expected to materialise from 2020 or 2021.

In the meantime, operators have since 2017 been racing to test pilot networks, mainly in the advanced mobile markets of Europe, Asia-Pacific and North America.

But the controversy that arose at the end of 2018 between the United States and Huawei, the number one global supplier of telecoms network equipment and a leader in mobile handsets, is now casting uncertainty over the rollout timetable. The United States is accusing the Chinese manufacturer of violating sanctions against Iran and stealing trade secrets from one of its partners, the operator T-Mobile.

5G caught in a geopolitical storm

For reasons of national security and amid suspicions of espionage via telecoms equipment installed on its territory, the United States has banned all Chinese manufacturers from supplying telecoms network equipment, including 5G equipment with effect from August 2018. As of now, the leading suppliers to the US market are European equipment makers Ericsson and Nokia and Korean manufacturer Samsung.

Against this backdrop, the United States are strongly encouraging other countries – and the European Union in particular – to follow its lead with regard to their own 5G infrastructure. To date, Canada, Australia, New Zealand and Japan have also banned Huawei as a supplier. Germany, the United Kingdom, France and Poland are attempting to find less drastic solutions.

Not only is the Huawei affair complicating trade talks between China and the United States; beyond that, it seems to have triggered a genuine geopolitical storm, taking 5G hostage.

During the world’s largest telecoms event – Mobile World Congress 2019 – in Barcelona at the end of February, there was much talk of folding mobile handsets, innovation and uses for 5G. But the Huawei affair and its fallout were all-pervading.